Your Legal Counsel for Life
Contact Us
Home
Attorneys
Bryan A. Giribaldo 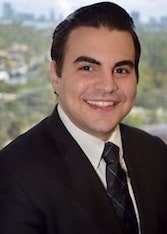 Bryan A. Giribaldo, an associate at Chepenik Trushin LLP, concentrates his practice on insurance defense litigation and coverage disputes, as well as complex business and commercial litigation.

While in law school, Mr. Giribaldo focused his study on business and taxation law, including taking numerous courses on business entities, income taxation, corporate taxation, international taxation, international business transactions, and mergers and acquisitions. In addition to his high marks earned in these courses, Mr. Giribaldo was awarded the book award for achieving the highest grades in his Mergers and Acquisitions course.

During his second and third years of law school, Mr. Giribaldo served as a teacher’s assistant in both legal writing & appellate advocacy, two courses taught to all first-year law students. During the summer of 2013, Mr. Giribaldo interned at TECO Energy, Inc., a Tampa based energy company, where he had the opportunity to further develop his research and writing skills while working on contract drafting and analysis. During his final year in law school, Mr. Giribaldo served as the Student Works Editor for the Florida Journal of Technology Law & Policy. Mr. Giribaldo’s case comment evaluating and analyzing a controversial Federal District Court of Appeal decision was selected for publication in the Journal’s June 2014 issue.

Prior to working at Chepenik Trushin LLP, Mr. Giribaldo worked in both small and large firm settings, practicing a variety of areas of law, including personal injury insurance defense, commercial litigation, and consumer litigation. Outside of his legal work, Mr. Giribaldo enjoys spending time with his wife, Christina, exercising, and watching football, especially his Alma Mater, the Texas Longhorns.

Honors
Rising Star Super Lawyer 2018
Contact Us
Practice Areas & Services
Client Reviews
★★★★★
Just want to start off by saying the team assembled at CHEPENIK/TRUSHIN is by far amazing. Their dedication and the amount of time they put into working on my file is by far the best service I have ever received. And the cherry on top is their ability to communicate with me and their entire team is seamless. Peter C is also a wealth of knowledge that can guide you in the right direction and place you in the competence of BART and BRAD. This is a firm I highly recommend. Ali M, business owner, Miami, FL 2018
★★★★★
The team at Chepenik Trushin LLP are experienced, professional and dedicated in handling all Probate, Guardianship and Estate legal matters. I have referred them numerous clients over the years; all of which have been truly appreciative of their firm's excellence in representation. Jesse S., Esq.
★★★★★
I highly recommend this law firm for your estate planning and probate litigation needs. Passionate and dedicate attorneys who are committed to going above and beyond to help their clients. Tiffany C Gonzalez, CPA
★★★★★
He (Honorable Magistrate Judge Kimler, Miami Dade Probate and Guardianship court) taught me well. After my experience with my client and your law firm as my legal counsel, the standing joke at Dade County courthouse is that I know the Marchman Act almost as well as the judge who wrote it. Ms. Bambi Williams, GCM
★★★★★
So very impressed with Bradley Trushin, Partner at Chepenik Trushin LLP. I had the privilege of attending his presentation on Probate, Guardianship & Elder Abuse. Brad presented today to 45 trust bankers and probate realtors. Brad is a top notch Litigator with a keen attention to detail. Maji Ramos, RE Broker
View More
Submit a Law Firm Client Review
Contact Us