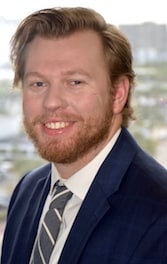 Mr. Walsh was born in New York, but grew up in both Raleigh, North Carolina and Spring Lake Heights, New Jersey, where he played football, ice hockey, and lacrosse. He continued to play lacrosse at North Carolina State University, where he earned his B.S. in mathematics with a minor in economics in 2016, made multiple Dean's Lists and graduated with honors. At the University of Miami School of Law, Mr. Walsh earned a Dean's Certificate of Achievement in Criminal Procedure, Elements of Law, Federal Income Tax, Trusts & Estates, and Business Associations and earned the CALI Excellence for the Future Award in Legislation and Administrative Law. He was an Articles & Comments Editor on the University of Miami Law Review, worked as Dean's Fellow in Elements of Law, and became the Inagural Robert E. Dooley Scholar. While at UM Law, Mr. Walsh worked as an intern in the Health Rights Clinic at Miami Law and, in his third year, served as Judicial Intern to Justice R. Fred Lewis at the Florida Supreme Court in Tallahassee. Additionally, Mr. Walsh coached the lacrosse team at the University of Miami all three years he attended law school.