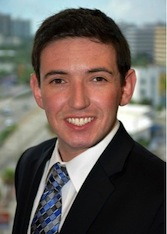 While in law school, Mr. Nicoll concentrated his study on business law and intellectual property law, including courses on trademarks, copyrights, patents, trade secrets, labor law, antitrust law and corporations. Mr. Nicoll ultimately received a certificate in intellectual property law upon graduating from law school, and, following his 1L year, Mr. Nicoll spent a summer abroad studying business law in Paris and Montpellier, France, including courses in business torts and franchise regulation. In his 3L year, Mr. Nicoll earned the book award, given to the student with the highest grade in a course, in Florida Constitutional Law.

During his second and third years of law school, Mr. Nicoll was actively involved as a Student Ambassador to help organize and lead the orientation program for incoming 1Ls and to serve as a mentor to the new students for the remainder of their first year. Mr. Nicoll also served as a research assistant while in law school, researching and analyzing antitrust case law for inclusion in updates to Kintner’s Federal Antitrust Law treatise. In his final semester, Mr. Nicoll interned at the Gainesville City Attorney’s Office, where he had the opportunity to further develop his research and writing skills while working on matters ranging from First Amendment concerns to community redevelopment and non-profit corporate governance issues. While working for the Gainesville City Attorney, Mr. Nicoll refined his contract drafting skills, including preparing a contract that allocated funds for a computer lab for underprivileged children.

Mr. Nicoll began working at Chepenik Trushin LLP as a law clerk and transitioned to an associate upon admission to the Florida Bar in September 2014.

HONORS
Dean’s List
Certificate in Intellectual Property
Book Award: Florida Constitutional Law
Contact Us
Practice Areas & Services
Client Reviews
★★★★★
Just want to start off by saying the team assembled at CHEPENIK/TRUSHIN is by far amazing. Their dedication and the amount of time they put into working on my file is by far the best service I have ever received. And the cherry on top is their ability to communicate with me and their entire team is seamless. Peter C is also a wealth of knowledge that can guide you in the right direction and place you in the competence of BART and BRAD. This is a firm I highly recommend. Ali M, business owner, Miami, FL 2018
★★★★★
The team at Chepenik Trushin LLP are experienced, professional and dedicated in handling all Probate, Guardianship and Estate legal matters. I have referred them numerous clients over the years; all of which have been truly appreciative of their firm's excellence in representation. Jesse S., Esq.
★★★★★
I highly recommend this law firm for your estate planning and probate litigation needs. Passionate and dedicate attorneys who are committed to going above and beyond to help their clients. Tiffany C Gonzalez, CPA
★★★★★
He (Honorable Magistrate Judge Kimler, Miami Dade Probate and Guardianship court) taught me well. After my experience with my client and your law firm as my legal counsel, the standing joke at Dade County courthouse is that I know the Marchman Act almost as well as the judge who wrote it. Ms. Bambi Williams, GCM
★★★★★
So very impressed with Bradley Trushin, Partner at Chepenik Trushin LLP. I had the privilege of attending his presentation on Probate, Guardianship & Elder Abuse. Brad presented today to 45 trust bankers and probate realtors. Brad is a top notch Litigator with a keen attention to detail. Maji Ramos, RE Broker
View More
Submit a Law Firm Client Review
Contact Us