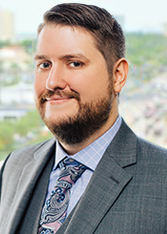 Mr. Williams graduated from the University of Central Florida with a B.A. (Film, 2013) and magna cum laude from the University of Miami School of Law (J.D., 2016). While in law school, Mr. Williams was actively involved in the school’s advocacy organizations, where he held the position of vice-president of both the nationally ranked Charles C. Papy Moot Court Board and UM’s Mock Trial Team. While competing nationally for UM’s Moot Court, Mr. Williams won the prestigious Irving R. Kaufman Memorial Securities Law Moot Court Competition, for which he was granted the honor of arguing before a distinguished panel of judges including United States Supreme Court Justice Samuel Alito. In addition, Mr. Williams participated in the School of Law’s Federal Appellate clinic, wherein he researched and drafted a brief in an appeal in the Eleventh Circuit Court of Appeals. In recognition of his oral and written advocacy skills, Mr. Williams was selected for membership in the honorary organization the Order of the Barristers, and, for his legal scholarship, was selected for membership in the honorary organization, the Order of the Coif.

The Florida Bar
Member Since: September 2016